It's now been 14 years since my wonderful company decided it was time for me to retire. It's worked out very, very well.

Since that time in re-entering the art world I have had 2 displays in the Nebraska Governor's Mansion. I have had numerous articles written about my art in the newspapers and have had my work published in an art magazine.

I have work in the Nebraska Arts Council Offices and my work is carried at the Durham Western Heritage Museum.

I've had work  in a gallery in Santa Monica and have my work displayed in Omaha's Old Market Artist Gallery. My artwork is now carried at Gallery Eppley at the Omaha Airport. My political posters are also carried by the Chisholm-Larsson Gallery in New York.

I've done caricatures at the NCAA College World Series and have been in many art shows throughout the Midwest including the Omaha Summer Arts Festival.

I have participated in the Rimington Trophy charity auction for the last few years to benefit the Boomer Esiason Foundation for Cystic Fibrosis.

The highlight for me in 2015 was being chosen as the artist to create the artwork for Berkshire Hathaway's 50th Anniversary meeting.

"Known for his boldly-colored prints hearkening back to an era of big playbills, rock n' roll posters, and album covers, Costanzo has hung paintings in galleries in California, downtown Omaha, and the Nebraska Governor's Mansion in Lincoln"

All artwork on this website is copyrighted by the artist and may not be duplicated without permission. 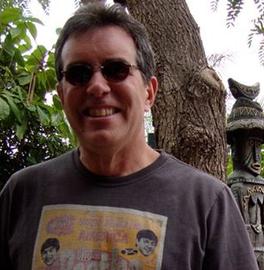